We visited Cory Archangel’s studio, which had a particularly strong impact on the participants. Adrian Barrientes, New York Arts Practicum participant of 2013 wrote:

It was Arcangel’s work that my sparked interest in the possibilities of exploiting the technology I grew up on. His work is much more than just working with technology though, as evidenced through this insightful studio visit. The inspiring thing from this studio visit was learning that he fails many times as he iterates his way to creating a finished, resolved work. We were able to see a sincere, humorous, and rather prominent artist in a way that was refreshing, and heartening. We visited the galleries on the Lower East side, including talks with Candace Madey and Courtney Childress at On Stellar Rays, and Sam Wilson at Klaus von Nichtssagend. New York Arts Practicum’s first critique, led by the artist Brad Troemel at Eyebeam, served as a good introductory to how the Practicum’s participants managed to pull together work despite all of the hurdles of transitioning and attempting to settle into New York’s fast-paced environment. Troemel also radiated this fast, athletic enthusiasm that emanates in his rapid production of sculptures and digital ephemera through the Jogging tumblr. The discussion of his work was followed by helpful suggestions and critiques regarding the cohorts’ own practices.

Troemel’s discussion and ideas behind his Jogging blog are in correlation with the refresh-button-clicking, ADHD-driven attitudes that many users of social media are familiar with. Rather than fall by the wayside by producing a few, perhaps even of master quality, art works, Troemel recognizes the “aesthlete”, or the artists working towards constantly producing work to keep up with the feeds, refresh rates, and the social media’s users hunger for now-ness. Even when moving to talking about our work, there were suggestions of “practice” and “strengthening our muscle” when working. In a simple sense, practice makes perfect. 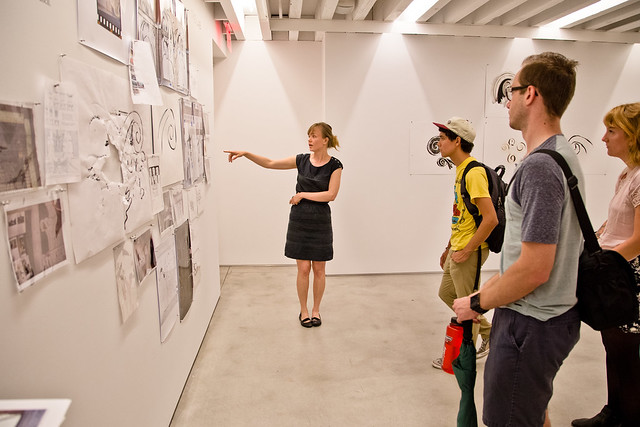 On July 9th the Tuesday cohort met with artist and educator Sara Greenberger Rafferty in her studio in Red Hook, Brooklyn. During the visit, Rafferty shared in detail the workings and challenges of her recent project at Klaus von Nichtssagend Gallery titled Work . Throughout the visit, Rafferty spoke about her transition from undergraduate student to artist working in New York City—she encouraged the cohort to be patient and determined with this process. After the site visit, the Tuesday cohort critiqued with the artist, who offered a sincere dialogue on the work shown. The interior of  Andrea Champlin’s studio in Queens is permeated with cut-up faces, juxtaposed textures, and a constant exploratory attitude that resonates throughout her work. Taking images and inspiration from photographs, the internet, and magazines, she begins to totally distort them to form her own personal language. When we moved on from discussing her work towards critique of the NYAP participants, she was able to provide us with insight into artists that we may take inspiration from and give advice on how to improve our conceptual ideas.

Champlin gave the cohorts insight to how our work relates to other prominent artists, and how to go about strengthening their ideas and work for their final two weeks of the program. The participants truly appreciated their one-on-one with someone who is already established and has quality work behind them. Champlin’s constantly experimental energy and critique during the visit proved to be a significant source of inspiration for them. On Friday July 5, artist Daniel J. Wilson met with the New York Arts Practicum, in Central Park, to discuss his recent projects, and general arts practice. Wilson, who in late 2011 drove a NYC cab and the recorded conversations of his passengers, spoke on his need to merge technology and art. This need, established the atmosphere of the visit, which centered on making a living in NYC (and elsewhere). Wilson stated that he believed that artists should merge their interests with alternative methods towards making a living. Wilson graciously shared his educational history (studying in Sweden), as well as the pragmatic and financial solutions for completing his projects. On June 25, the New York Arts Practicum met at Art in General with curators Courtney Finn and Jonathan Rider, and artist Letha Wilson, to view Landmarks and Monuments.
Wilson, whose work was on display for the month of June at the non-profit gallery, walked the Tuesday cohort through the exhibition describing her interests in material and image. Before the walkthrough, however, curators Finn and Ride spoke on the history of Art and General and their roles at the space. This short introduction the gallery provided insight into the workings of a non-profit gallery in SoHo for the cohort. They graciously invited the cohorts to apply to the open-call entry that gallery has maintained since opening in 1981. Wilson then invited the Practicum to walk through her exhibition. The artist spoke of her processes and interests when making work. Wilson described her need to visit her home state of Colorado, and her hikes and photographic ventures in the Colorado wilderness. This practice — walking and documenting — influences the artist’s interest in concrete casting.